How does one describe the feel of, or for that matter, the smell of an era? Were the Middle Ages as we have been taught and certainly as depicted in our films and literature, a dirty malodorous break between the public bathing obsessed Romans and the freshly laundered Italian Renaissance? 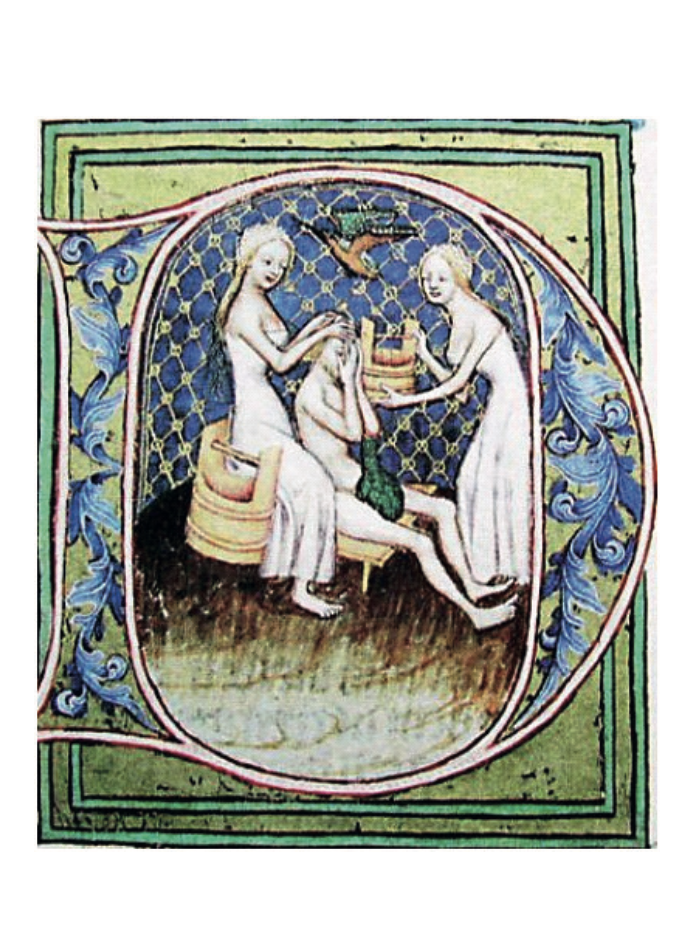 In short to understand anything in history, including how people smelled, we must not only look to what evidence we have, but how it is presented and who was recording it.

The Arab traveller Ibn Fadlan famously records the Vikings as the filthiest of God’s creatures whilst Anglo- Saxon churchmen around the same time were complaining about the Vikings’ excessive cleanness. This either means that the Anglo Saxons were truly disgusting or Ibn Fadlan and the Anglo Saxon chroniclers were not discussing the same thing.

They were and they weren’t.

Ibn Fadlan viewed the Vikings as filthy as they did not conform to his urbanised Arab sensitivities of ritual cleanliness as prescribed in Islamic law and conversely the Anglo Saxons thought that full bathing once a week was excessive and designed to impress the girls!

Modern writers tend to focus on the most outlandish or different behaviours in past societies to make a point as can been seen in programs like Horrible Histories and sometimes quote medieval examples that even for their time may not have reflected the norm. A case in point is sumptuary laws which decree what is appropriate wear for different classes of person; do we take these as a description of what was actually in wear; or do we read between the lines and surmise that these laws are trying to ban what is already a norm?

Personally I tend to the later, laws generally don’t prohibit what is not already present in society and frequently they are not effective. Medieval clergy certainly heaped scorn and damnation upon the women who ‘painted and adorned themselves’ as in their eyes such vanities were only practiced in order to lure men into committing sins of the flesh.

“They always strive to add improvements by their industry to get from men what they want.”

Cosmetic implements, mirrors and false tresses (hair extensions) were some of the items ordered to be placed on the bonfires of vanities by the fanatical preacher, Savonarola, in late 15th century Florence, who later ended on a bonfire himself. 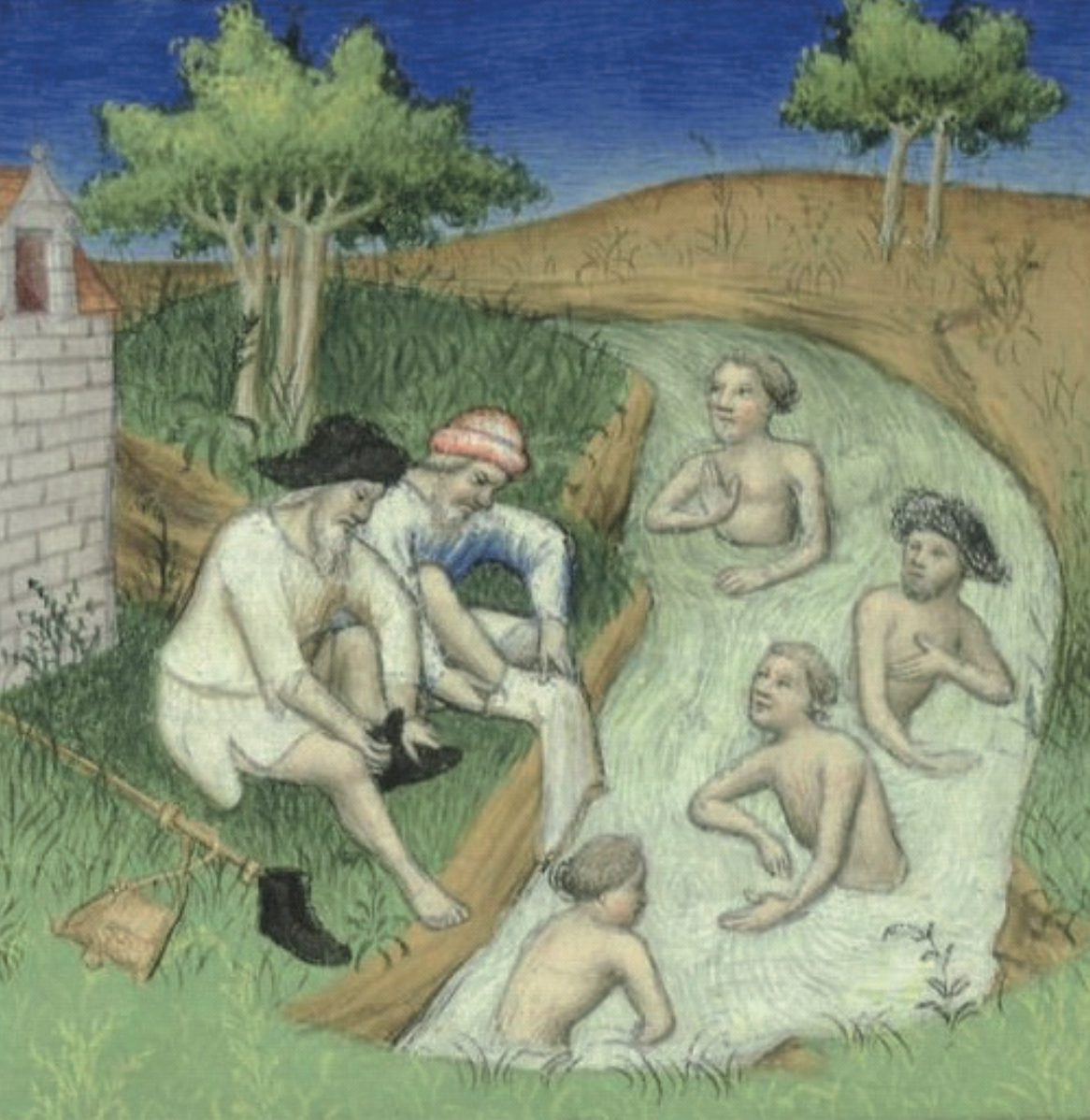 So did they bathe or not?

The church did not see bathing as being in itself sinful, but it did tend to regard anything to do with the worldly flesh as potentially sinful, and their recording of secular fashions and adornment does reflect this. Public bathing on the Roman scale was pretty much unknown in medieval Europe, though from some descriptions of the dubious cleanliness of some Roman baths this may not have been a totally bad thing. The culture of bathing had survived along the Mediterranean basin especially in Jewish and later Islamic cultures where ritualized washing was a religious obligation as well as a dictate for ‘civilised’ living.

The church saw itself as the custodian of the Roman tradition, which strongly featured bathing, and monasteries built in the Cluniac tradition featured large lavatory blocks for bodily evacuations as well as cleansing and were supplied with fresh water and basins (and in answer to your unspoken lavatory question it was with cabbage leaves). Whilst few clergy subscribed to St Francis of Assi’s reputed boast that ‘lice were the pearls of poverty’, as it reflected an extreme, and physically uncomfortable view in favour of the mortification of the (temporary) flesh in order to beautify the (eternal) spirit.

Much of the blame for this ‘no pain, no gain’ school of thought in Christianity can be laid at the dirty feet of St John the Baptist; but even though he dressed in skins and ate insects, he at least he did get a through soaking in the river Jordan on occasion.

This example proved to be quite inspirational among a group of  “wouldn’t it be great if Lent went for all year” minded clergy and pretty soon the early Christian world was crowded, but certainly not awash in pious anchorites fasting in deserts (St Hilarion) , squatting on deserted windswept islands ( St Guthlac), living in caves (St Anthony), or even perched on top of columns for decades at a time (St Simon).

Needless to say the bathroom facilities in all of these locations were one star or less. As extreme as they were these holy men had a profound impact on medieval Christian thought on the body and its needs. 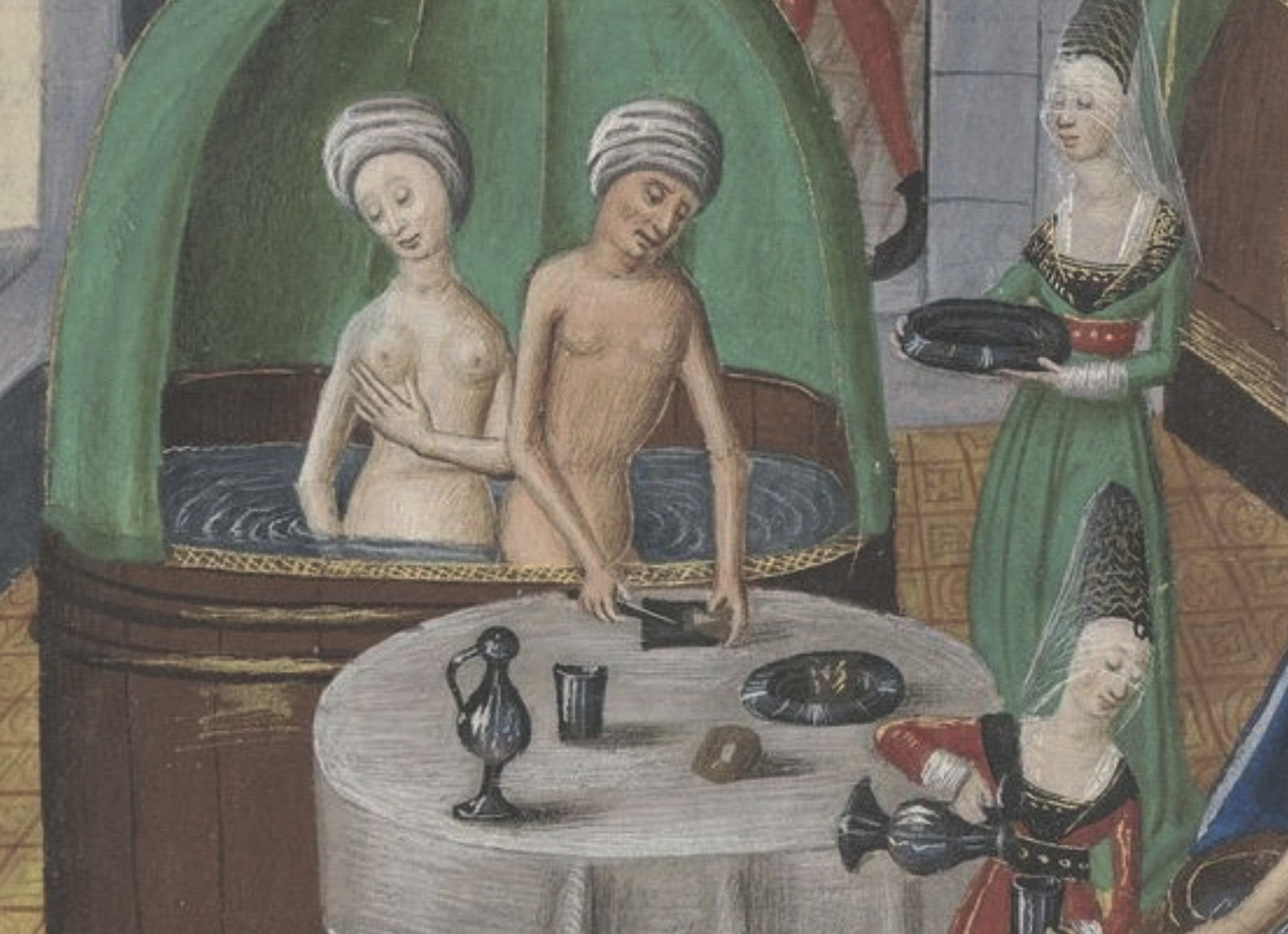 The growth of urban centres later in the Middle Ages brought with it bath houses boasting all the amenities. In 1292 there were 26 licensed bathhouses within the walls of Paris. In Breslau, modern Wroclaw, during the 15th century it was legislated that every citizen had to visit a public bath at least once a week or be fined or arrested and spend some time in the “tower”. In 1511, a German craftsman and merchant Lucas Rem recorded 127 visits to the baths in his diary over a few months.

Bath houses, like their Middle Eastern cousins, Hamans, often adjoined bakeries so that the fires from the ovens could also heat the water and a full routine of massages, and scrubs were the norm. Unlike Hamans mixed bathing was common and alcohol and food was readily available.

In fact if we take medieval art as any indication food and drink were obligatory bath time accompaniments as were to a lesser degree cards, dice and music. Nudity or near nudity, mixing of sexes, alcohol and a party atmosphere; what could possibly go wrong? Apparently a lot if you are a medieval clergyman.

Some witnesses seemed to marvel at the innocence of people of both sexes and of all ages bathing together in the village baths on a Saturday; though some of the clergy also tend to spend a little too much ink on describing the healthy young bodies on the way to the baths!

Whilst public baths also became associated with prostitution, especially in the seedier parts of towns, they were commonplace enough for it not to be shocking to offer a session in a steambath as a tip to your employees:

‘To Jehan Petit, for him and his fellow valets of the bedchamber to visit the steambaths: 108 sous”

The dukes of Burgundy even had diplomatic conferences in large specially built baths, possibly in imitation of Charlemagne whose passion for bathing may have something to do with his sighting of the Imperial capital at Aachen which is still famous for its thermal springs. He was by all accounts an excellent swimmer! 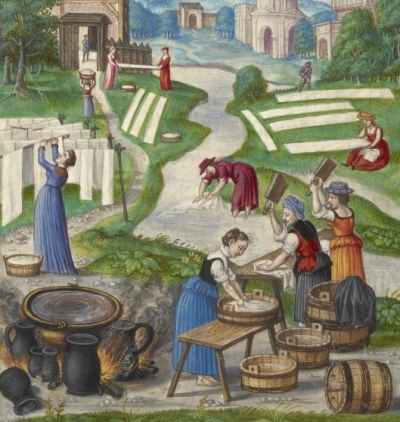 To offer a bath to a visitor who had just travelled a distance was the height of courtesy and a bathing tub seemed to be a common item in wealthier households :

“If your lord wishes to bathe and wash his body clean, hang sheets round the roof, every one full of flowers and sweet green herbs, and have five or six sponges to sit or lean upon, and see that you have one big sponge to sit upon, and a sheet over so that he may bathe there for a while, and have a sponge also for his feet, if there be any to spare, and always be careful that the door is shut. Have a basin full of hot fresh herbs and wash his body with a soft sponge, rinse him with fair warm rose-water, and throw it over him; then let him go to bed; but see that the bed be sweet and nice; and first put on his socks and slippers so that he may go near the fire and stand on his foot-sheet, wipe him dry with a clean cloth, and take him to bed to cure his troubles.” (Book of Nurture 1450).

As such a bath was an expensive luxury, at least in terms of labour, washing every morning was the recommended norm on days you were not going to the baths. “After you have evacuated yourself and trussed your points, comb your head often and do so at diverse times of the day. Wash your hands and wrists, your face and eyes and teeth with cold water”. (1450).

Other texts such as Tacuinum Sanitatis of which numerous copies still survive, recommend warm scent infused waters for washing in the morning as well as for washing of the hands before eating.

“To make water for washing hands at table: Boil sage, then strain the water and cool it until it is a little more than lukewarm. Or use chamomile, marjoram, or rosemary boiled with orange peel. Bay leaves are also good” (Le Menagier de Paris circa 1400). 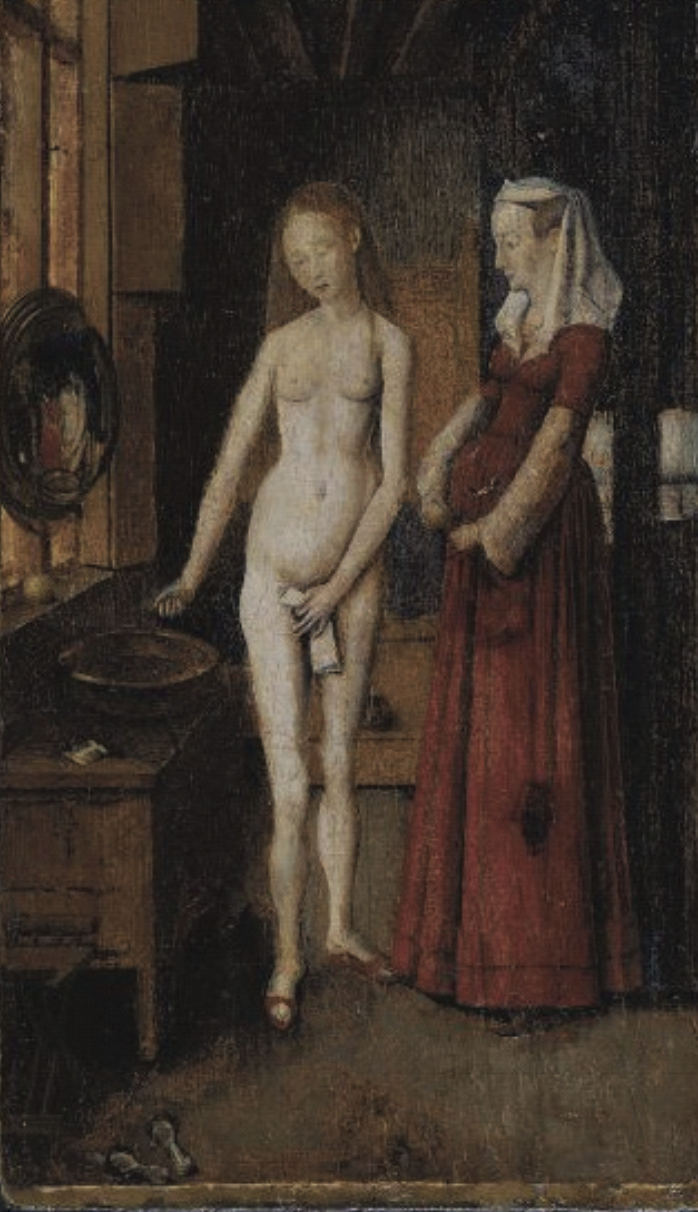 Certainly a washstand is a frequent sight in medieval paintings of bedchambers and remained in use across most of Europe until well into the 20th century for the morning wash of ‘face, hands, pits and bits’.

Soap first appears in Roman texts as an invention of the Gauls and was disdainfully associated with other barbarous affectations such as sausages, beer and trousers. However the physician Galen mentions it as a medicament and as a means of cleansing the body.

The writings attributed to the 8th-century Arab savant Jabir ibn Hayyan also repeatedly mention soap as a cleansing agent. By the later Middle Ages recipes for scented soaps appear common and guilds for its manufacture are mention.

Curiously much of the soap was made with olive oil rather than animal fat and was known as Castile soap and was often purchased as a base to add other ingredients such as perfumed oils, or scrub such as the clove and musk scented soap in the Decameron. The older of us will remember the yellow bars of Sunlight laundry soap which was almost a pure Castile style soap.

The scented soaps or washes could also be supplemented by scented body powders, splashes such as Carmelite water which is still made in Germany and marketed as Kloisterfrau Wasser, and perfumes.

Recipes for all of these preparations survive as well as scent sachets and pomanders for pillows, bed linen towels and even riding gloves. The use of scent was considered important for good health as bad smells were, not unnaturally, associated with sickness and corruption.

Once you were clean there was no point in putting on dirty clothes and underclothing of a shirt and breeches or braes, should be changed every day and herb infused waters are often mentioned for laundering linen.

The common myth that medieval people stored their clothes in the toilet so that the stench would repel moths ( and damn near everyone else) are at striking odds the numerous recorded recipes for scented sachets to be stored with folded clothes to keep them smelling fresh.

To be well turned out in medieval society meant that you had to be well groomed, washed, discretely scented, have neatly trimmed and clean nails, white teeth spotless skin and fresh breath. Did everyone achieve this then? No but then a brief journey on public transport on a summers day will convince you that many don’t achieve it today either.

Would we find the Middle Ages odorous? Possibly. Certainly some parts of the towns such as the shambles could be decidedly whiffy and it would take us some time to adjust to the ever-present smell of domestic animals. Conversely the air was much fresher and comparatively much richer in oxygen than it is now. Maybe we should be asking how a medieval person would cope with the petrochemical exhaust fume laden cacophony of noise of modern city living?

Damien Fegan is a museum and historical author, presenter and educator based in Brisbane. Damien is now in his fifth decade of re-enacment, and has re-enacted a number of periods and locales.

You can keep up with Damien’s work through his Museum History Guy Facebook page, or through some of the other Historia projects linked below.

Camping Through The Ages Raffles!