He who hath no sword,

No item in medieval history excites as much curiosity and misinformation as the Sword. Light, well balanced and deadly, a medieval sword was not the slightly sharp crowbar of popular myth. A typical single-handed sword weighed generally between 700 g and 1.5 kg at the most.  As a comparison a 1 litre carton of milk weighs 1kg: if you are strong enough to put milk on your breakfast cereal unaided, you could easily lift a sword. Most swords had a tapering double- edged blade, a crosspiece to protect the hand, a grip and a pommel below the grip to act as a counterweight.

Many swords feature a groove or grooves running down the blade. Called the Fuller, this strengthens the sword by adding multiple curves into the profile of the blade, making it lighter and stronger. The groves are not, repeat NOT to:

The sword was the most versatile, expensive and prestigious of weapons of the middle ages. It could be used to attack with cut, slash or thrust and could also to defend, though swords were designed to be used with a shield until the introduction of two handed swords in the 1300’s. This coincides with the development of plate armour, as it is a good idea to have a bit of extra protection if you are can’t stop incoming nasty things with your shield! The medieval two handed sword generally weighed under 2.5 kg; often much less.

Whilst the giant 10kg sword of popular myth would make an impact on an opponent, actually hitting them with it, without popping your shoulder, elbow and wrist joints might prove difficult. It is not so much a matter of having a sword light enough to swing for hours on end rather than being able get your sword where you need it in the split second that it needs to be there! 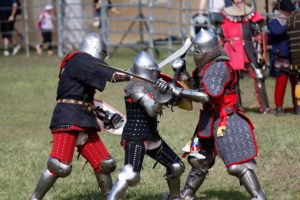 Swords at the Abbey Medieval Festival

The weapons used by the re-enactors at the Abbey Medieval Festival generally only differ from the originals in the sharpness of their edge. Swords were rarely razor sharp, not because they could not achieve a razor edge (after all what did they shave with?) but because a thin razor edge would blunt immediately on contact with a hard surface such as armour or another sword. A sharp chisel edge was preferred for most swords; if you have ever plunged your hand into a box of old tools and come into contact with the business end of a wood-working chisel, you can appreciate how devastating a chisel edged sword could be.

It became customary to use blunted or “plaisance” (pleasant) weapons in tournaments; though believe me, the experience can only be considered pleasant when compared with being hit by a sharp sword.  During the Renaissance it became customary to “foil” or blunt and cover the tip of a rapier when practising your swordsmanship, which is a sensible precaution if you want to keep your friends.

Don’t forget, if you are planning on bringing along your favourite (steel, wooden, foam, cardboard, big, small, indifferent) sword to the festival this year, as well as your ticket, you will need a weapons permit so that we can keep everyone safe. Click here to apply.