Blog
You are here: Home / Blog / 2018 Abbey Medieval Festival / Something for the Lords!

There is something for every Lord and Lady at the Abbey Medieval Festival BUT if ever there was a festival demonstrating male prowess, strength and survival skills, this festival could be described as a very male expression.  My Lords…we have tried to pick a few to summarize ….but you simply have to see them all.

Tournament of Strength and Skill

Located in the Castle arena, this competition is hosted by the Company of the Phoenix with entrants hailing from various re-enactment groups participating at the festival. The Tournament of Strength and Skill is a medieval obstacle course designed for training for the field of battle and to test the combatants’ physical prowess. Made up of obstacles to test a number of important skills that a combating Lord would require on the field of battle such as speed, balance, strength, ability to vault a horse and accuracy with a spear, lance and sword.  You can’t possibly watch this and not engage your male competitive spirit.

While this is not a performance, you do not want to miss Cottereaux’s ‘Behemoth’, the largest functioning medieval Trebuchet in the southern hemisphere.  It will showcase its firepower twice a day. A Trebuchet (French trébuchet) is a  medieval siege engine of catapult or stave sling design, and functions by the use of a swinging arm to cast a projectile. The traction trebuchet, also referred to as a Mangonel,  first appeared in Ancient China during the 4th century BC as a siege weapon. During sieges, heavy stones were cast sometimes with oil and fire to damage castle walls and while it would be very tempting to use the Trebuchet to hurl naughty little Lords afar, the Sheriff would not encourage this practice.

Travel back in time to the Dark Ages (Byzantine era) by taking a stroll through the Commons where Jorth Gar – the New Varangian Guard is located.

The Byzantine Emperor Basil II formed the Varangian Guard to act as his elite personal bodyguards.  Membership initially consisted of the fierce Rus Vikings, however after 1066, the ranks of the Varangian Guard swelled as mighty Saxon warriors sought membership.  The rewards were lucrative and their reputation was legendary.  It was not easy to join the Varangian Guard as their battle skills were exceptional.   Prospective members not only had to pay to join, they had to prove themselves worthy often by a show of combat skill against existing seasoned veterans of the elite Varangian Guard.

The re-enactment group Jorth Gar will present a series of single combats and heroic fighting.  In their day, the warriors of the Varangian Guard needed to acquire and maintain their skills and learn new technology. This combat display is a crowd engager and demonstrates the variety of weapons and fighting techniques available to the Varangian Guard.

You will be in awe of the Varangian Guard.

You’ll have heard of the ancient tradition of Turkish Oil Wrestling, which is a huge crowd favourite of the festival, not only for its display but for it’s historical accuracy and it also is one of the five tournaments of the festival. Traditional Turkish archery will not disappoint you either.  This performance demonstrates the use of bows and arrows in various traditional ways such as during the times of war and peace. The Turks were very effective in using bows and arrows shooting very accurately in a variety of situations. The demonstrations will include use of whistling arrows for game and communication purposes, shooting in attack and retreat situations (singly or as a group) 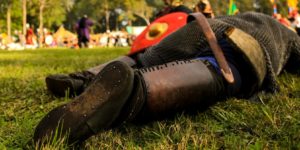 Watch different Crusader groups combat at Skirmish at Sephoria (on Sunday only in an army format), shooting down in to a well or down from the top of castle wall, speed shooting and other demonstration of various Turkish shooting techniques.

What’s there for the Kids and Families?

Something for the Ladies!
Scroll to top