The significance of animals in the Middle Ages

In comparison to our lives today, life in the dark and middle ages was not easy.  Peoples’ routines revolved around the seasons – which would signify whether or not they had food – but hand-in-hand for the people that lived during those centuries were the animals that served them.  Animals served as transport, hunters, food and companions and played a very important role.

We think that this year the animals deserve homage! All of the critters including the monstrous and mighty right down to the meek and minuscule.

From the animals essential to life and survival such as chicken, bees, sheep, goats, swine and cattle; the hunting and herding dogs, the draft animals that carried food and supplies  and then on to the horses that carried people on their travels and into the hunt and to war…. Animals served a huge role in the lives of their owners.

The Abbey Medieval Festival attracts over 30,000 people across Australia who make the annual pilgrimage to Caboolture, Queensland for two-days of non-stop feasting, music, dancing and drama of Medieval era. And this year – we honour the Animals too!

Honour the horses and hounds

The bloody hand-to-hand warfare that raged across continents throughout the dark and middle ages is owed just as much to the horses as it does to the men that fought in them.   Arabs outmanoeuvred their enemies in the desert on camels and horses, Vikings knew to make a beeline for the stables during raids in order to maintain their mobility on land  and European warfare owed much to the horses, mules and donkeys that carried them into battle and carried their supplies. 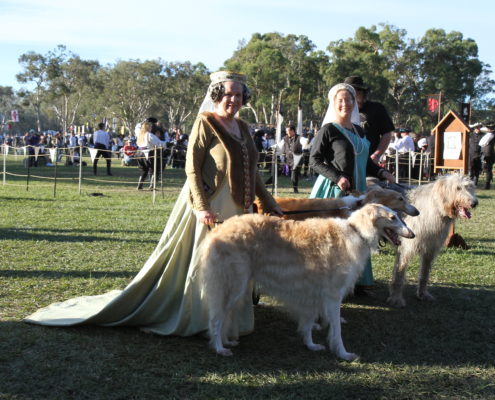 “We’ve got dogs, horses, goats and even chickens from the Dark ages and the Middle ages; we have animals that hark back to the Viking age; we’ve got Arabic dogs and horses that have changed little over time and we have a wide range of Medieval dogs, horses and chickens found during those times. We even have some of the oldest documented types of dogs represented, the Irish wolfhound, the greyhound and the Saluki” says Joust co-ordinator,  Paula Winkel.

Two Irish wolfhounds will feature at this year’s festival. Paula says there were depictions of this type of dog in manuscripts dating back to the pre-Christian era and historical accounts of “large rough coated hairy dogs  guarding houses and hunting wolves that had a close resemblance to the Irish wolfhound”.  Irish wolfhounds were highly valued for their large size and strength, and ownership of the swift Greyhound was restricted to nobility.

Unlike today, when breed and look are all-important factors, animals were usually differentiated by their use, their region of origin or their type and rather than by breed.  For example, Horses in the Middle Ages were described as “chargers or Destriers” (war horses), Courser (fast  racing horses) “Palfreys” (riding horses),  and “Sumpters” (packhorses).  And dogs that hunted by scent were called “Lymers” and Dogs that hunted by sight were called “Greyhounds”, “Aulants” were hounds that went after bigger game, and the “Mastiff” was a heavy set dog for really big game and for guarding,  and the “Kennet” were the smaller hunting dogs.

Birds and beasts and bees……

Falcons and hawks will feature at this year’s festival along with a range of dogs, horses and poultry that will see festival-goers having the opportunity to get up-close and personal with the birds and beasts. And look out for the bee-keepers, the humble buzzing bee makes an inaugural appearance this year. 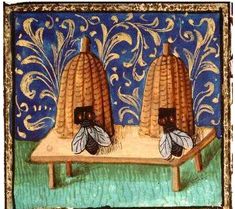 Paula says the key to hosting Australia’s most authentic re-enactment festival is fastidious attention to detail.
“We’re purists, we want this to look, sound, smell and feel as much like the Middle and Dark Ages as possible,” she says.

“Animals are key to that and a whole lot of detail and research into designing the Medieval costumes  for their handlers,  the type for fencing and cages, right down to the leather gear for the horses and dogs.

“Yes it’s slightly obsessive referring to manuscripts to make sure we get every detail correct; but there’s also a lot of satisfaction that goes behind making the attire to fit us and the animals perfectly.

“The festival is all about fun, adventure and history. So, travel back in time and have a blast.”  Located in Caboolture, The Abbey Medieval Festival, run by the Abbey Museum of Art and Archaeology, will be held on Saturday 14 and Sunday 15 July at 1-63 The Abbey Place, Caboolture.

Get you tickets online here!

Volunteering – Give it a go!

What’s there for the Kids and Families?
Scroll to top